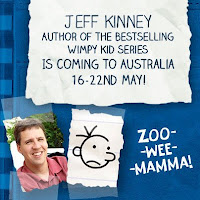 Fans of “The Diary of a Wimpy Kid” may know that Jeff Kinney will be in Melbourne next week, and his only public event is on 20th May.  Penguin Australia is running a competition to meet Jeff, so if you think that you have a budding writer in the household, get him or her to put pen to paper this weekend as the competition closes on Monday.  For more details, click here.

I just had to draw everyone’s attention to this gorgeous little book “Hatched” which is the first in “The Grimstones” series for children aged 9-12.  Based on a very successful children’s show where the story is told by marionettes, the book is illustrated with pictures of the marionettes and props from the show.

The story has been described as a gothic fairytale, and is told by Martha Grimstone who lives in a grand old house with her Grandpa Grimstone, her Aunt Gertrude, and her mother, Velvetta.  Her father, Mortimer died when she was a baby and her mother has never got over his death, crying all the time and dreaming of the babies that they would have had together.  The Grimstones are no ordinary family, but a magical one and her grandfather is well known for his potions to heal people. When he refuses to teach Martha the spell to make her mother the baby she desperately wants, Martha sneaks into his apothecary and tries to do it herself.  But things don’t work out, and little Crumpet emerges from his egg with three legs.

Here’s a little snippet from the show:

This is a story of how society doesn’t always accept people who are different – something that the author, Aspyhia, is intimately related to as a deaf person in a hearing society.  You can catch the show at The Famous Spiegeltent at the Arts Centre in Melbourne on Sunday 26th February 2012 at 11 a.m.

For those with children who love the Skulduggery Pleasant series, book 6 – Death Bringer – is out now and we have copies in store.  In this adventure, “the Death Bringer has risen.  Skulduggery and Valkyrie have seven days to uncover the Necromancers’ secret before it’s too late.  The clock is ticking.  Lord Vile is loose.  And after this one, nothing will ever be the same again”.
For those who are not aware of the series, it is suitable for upper primary school readers.   Here’s a synopsis of the first book in the series, “Skulduggery Pleasant”, from the publisher’s website:
Stephanie′s uncle Gordon is a writer of horror fiction. But when he dies and leaves her his estate, Stephanie learns that while he may have written horror, it certainly wasn′t fiction.  Pursued by evil forces intent on recovering a mysterious key, Stephanie finds help from an unusual source – the wisecracking skeleton of a dead wizard.   When all hell breaks loose, it′s lucky for Skulduggery that he′s already dead. Though he′s about to discover that being a skeleton doesn′t stop you from being tortured, if the torturer is determined enough. And if there′s anything Skulduggery hates, it′s torture… Will evil win the day?  Will Stephanie and Skulduggery stop bickering long enough to stop it? One thing′s for sure: evil won′t know what′s hit it.
This is a really popular series with the children, especially for the boys. 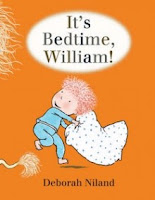 Come and visit us every second week on Thursday morning at 10:30 a.m. for our children’s storytime.

Our next session will be on Thursday 25 August when we will be reading the short listed books from the Australian Children’s Book Council Awards for 2011 to celebrate Book Week.

What is This Thing Called Love? is a lovely picture book written by Davide Cali and illustrated by Anna Laura Cantone.  In my opinion, it is gorgeous, so I just had to share the trailer that I found on the publisher’s website.  Here’s the publisher’s synopsis of the story:

What is this thing called love? What colour is it, and what shape? Is it sweet or savoury? Is it big or small? Like a lot of kids, Emma would really like to know. The problem is: everyone Emma asks – Mum, Dad, Grandma and Grandad – seems to have a different idea of what love is. This entertaining and ultimately touching tale of questions and answers reminds us that, for a child, the most important love is that which lies at the heart of your own family.

School breaks up in just over two weeks (less for some schools) so if you are looking for some gift ideas for the children, here are a few suggestions: 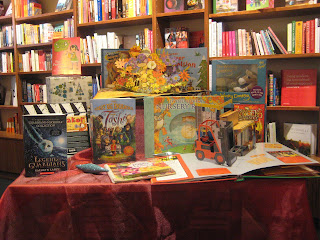 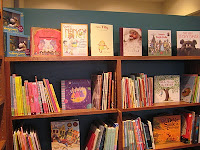 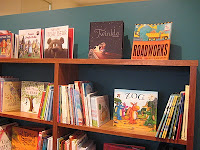 For all the customers who have asked me about stocking Julia Donaldson’s picture books, I now have some in store.  Julia Donaldson is probably known for her books The Gruffalo and The Gruffalo’s Child which were illustrated by Axel Scheffler, and as well as these, the store now has two other books by the same team. 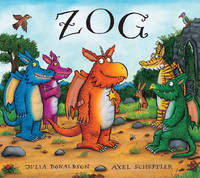 Zog is the keenest dragon in school, but will he ever win a golden star.  At Zog’s school he must learn to fly, roar, breathe fire, capture princesses and fight knights. But whenever he gets a bump or a scrape, a mysterious little girl is always there to nurse him better. Perhaps Zog  has a different destiny after all . . . 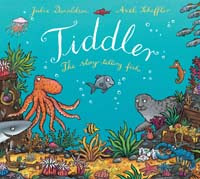 The smallest fish can tell tales …
“Sorry I’m late, Miss.  I set off really early
But on the way to school I was captured by a squid.
I wriggled and I struggled till a turtle came and rescued me.”
“Oh, no, he didn’t” “OH, YES, HE DID.”

Do you believe Tiddler’s story?