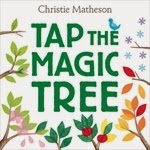 One of my customers bought this book and came in to tell me how her three year old really thought she was doing magic.  I found this youtube video of a child reading the book so I thought I would share it with you.

I’ve been reading the newspaper while having a cup of coffee this afternoon (my day off) and have come to the TV guide section.  On Thursday nights, SBS usually has some great cooking/travel shows to watch and this week is not exception with My Sri Lanka with Peter Kuruvita and one of my favourites, Luke Nguyen’s show Greater Mekong.

Then my glance moves across the page, and there on channel 10 is the new Jamie Oliver show Fifteen Minute Meals.  I have to admit to being a Jamie fan, and his cookbook Jamie’s 30 Minute Meals gets a regular workout (this week was the piri piri chicken – yum).  Oh, dilemma.  What to watch?  Maybe I should watch Jamie’s show and just take the cookbooks home for the other two as both should be being unpacked at the store now.

Here’s a video featuring the people who are working behind the scenes on Jamie’s new show.  I think he has a little bit of help to reach that 15 minute target.  What do you think?

I just had to draw everyone’s attention to this gorgeous little book “Hatched” which is the first in “The Grimstones” series for children aged 9-12.  Based on a very successful children’s show where the story is told by marionettes, the book is illustrated with pictures of the marionettes and props from the show.

The story has been described as a gothic fairytale, and is told by Martha Grimstone who lives in a grand old house with her Grandpa Grimstone, her Aunt Gertrude, and her mother, Velvetta.  Her father, Mortimer died when she was a baby and her mother has never got over his death, crying all the time and dreaming of the babies that they would have had together.  The Grimstones are no ordinary family, but a magical one and her grandfather is well known for his potions to heal people. When he refuses to teach Martha the spell to make her mother the baby she desperately wants, Martha sneaks into his apothecary and tries to do it herself.  But things don’t work out, and little Crumpet emerges from his egg with three legs.

Here’s a little snippet from the show:

This is a story of how society doesn’t always accept people who are different – something that the author, Aspyhia, is intimately related to as a deaf person in a hearing society.  You can catch the show at The Famous Spiegeltent at the Arts Centre in Melbourne on Sunday 26th February 2012 at 11 a.m.

The short list for the Man Booker Prize for 2011 was announced yesterday and included debut novels Pigeon English by Stephen Kelman and Snowdrops by A.D. Miller along with more established novelists Julian Barnes’s The Sense of Ending, Carol Birch’s Jamrach’s Menagerie, Patrick deWitt’s The Sister’s Brothers, and Half Blood Blues by Esi Edygyan.   Unfortunately, the last two titles are out of stock at the publisher.  However, we have in stock Pigeon English and Snowdrops, and hope to have The Sense of Ending and Jamrach’s Menagerie soon.

Here’s the publisher’s synopsis for the novels that are available:

Pigeon English, Stephen Kelman
Newly arrived from Ghana with his mother and older sister, eleven-year-old Harrison Opoku lives on the ninth floor of a block of flats on an inner-city housing estate. The second best runner in the whole of Year 7, Harri races through his new life in his personalised trainers – the Adidas stripes drawn on with marker pen – blissfully unaware of the very real threat all around him.  With equal fascination for the local gang – the Dell Farm Crew – and the pigeon who visits his balcony, Harri absorbs the many strange elements of his new life in England: watching, listening, and learning the tricks of inner-city survival.

But when a boy is knifed to death on the high street and a police appeal for witnesses draws only silence, Harri decides to start a murder investigation of his own. In doing so, he unwittingly endangers the fragile web his mother has spun around her family to try and keep them safe.

A. D. Miller’s Snowdrops is an intensely riveting psychological drama that unfolds over the course of one Moscow winter, as a young Englishman’s moral compass is spun by the seductive opportunities revealed to him by a new Russia: a land of hedonism and desperation, corruption and kindness, magical dachas and debauched nightclubs; a place where secrets – and corpses – come to light only when the deep snows start to thaw.  Snowdrops is a chilling story of love and moral freefall: of the corruption, by a corrupt society, of a corruptible young man.

The Sense of Ending, Julian Barnes
Tony Webster and his clique first met Adrian Finn at school. Sex-hungry and book-hungry, they would navigate the girl-less sixth form together, trading in affectations, in-jokes, rumour and wit. Maybe Adrian was a little more serious than the others, certainly more intelligent, but they all swore to stay friends for life.
Now Tony is in middle age. He’s had a career and a single marriage, a calm divorce. He’s certainly never tried to hurt anybody. Memory, though, is imperfect. It can always throw up surprises, as a lawyer’s letter is about to prove.

The Sense of an Ending is the story of one man coming to terms with the mutable past. Laced with trademark precision, dexterity and insight, it is the work of one of the world’s most distinguished writers.

Jamrach’s Menagerie, Carol Birch
London, 1857: after surviving an encounter with an escaped tiger on the streets of Bermondsey, nine-year-old Jaffy stumbles into a job for its owner, the wild animal collector, Mr Jamrach.  Commissioned by Jamrach to find and collect a sea dragon, Jaf soon joins a ship bound for the South Seas, and so begins a wonder-filled voyage of discovery.  But when things start to go awry, Jaf’s journey becomes a fight for survival which will push faith, love and friendship to their outermost limits.

Brilliantly written and utterly compulsive, Carol Birch’s novel evokes the smells, sights and flavours of the nineteenth century from the squalor of London to the islands of the South Seas. This historical adventure is a major literary accomplishment and will delight fans of Michel Faber and Sara Gruen.

To all our local customers, I thought I would bring to your attention The Comedy Gallery, a new initiative being put on by Andrew at The Hobson Stores here in Melrose Street, Sandringham, on Thursday 11th August at 8:30 p.m.  Andrew has kindly supported our store’s three book clubs by letting us use some of his chairs over the last few months. 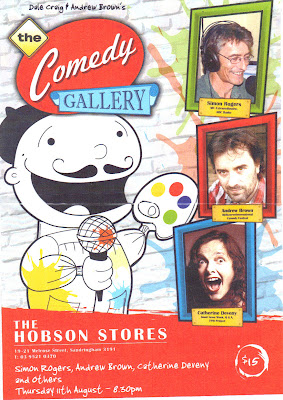 What is This Thing Called Love? is a lovely picture book written by Davide Cali and illustrated by Anna Laura Cantone.  In my opinion, it is gorgeous, so I just had to share the trailer that I found on the publisher’s website.  Here’s the publisher’s synopsis of the story:

What is this thing called love? What colour is it, and what shape? Is it sweet or savoury? Is it big or small? Like a lot of kids, Emma would really like to know. The problem is: everyone Emma asks – Mum, Dad, Grandma and Grandad – seems to have a different idea of what love is. This entertaining and ultimately touching tale of questions and answers reminds us that, for a child, the most important love is that which lies at the heart of your own family.

Last night, the store’s book club met to discuss Sarah Winman’s When God was a Rabbit and it was interesting to find that the book was one that some loved, most enjoyed, but two really didn’t like it. The  publisher describes When God was a Rabbit as “a mesmerising portrait of childhood and growing up: the loss of innocence, eccentricity and familial bonds.  Stripped down to its bare bones, it’s the story of the unbreakable bond between a brother and sister”.  However, for more information you might like to watch this youtube video featuring an interview with the author.
I think we all agreed that there were parts that we thought were beautifully written and as a debut novel the author showed great potential.  One of the interesting aspects of the novel was the number of gay characters although this was not a theme of the novel as being gay didn’t change the way they interacted with the other characters – they were just friends and family. I found this quite refreshing and I really appreciated the normality of it.
Surprising for me, was the reaction to the main character Elly.  Some liked her a lot, while a couple found her not very believable and considered that she narrated the story in language that a young child wouldn’t use, or that the humorous events described were a little contrived.  Having three children myself, I could imagine some of the funny events happening – the scene of the nativity play as Elly takes her revenge at being given the minor part of the innkeeper, and the Jubilee street party with Elly and Jenny singing Queen’s Bohemian Rhapsody (complete with “fig roll” instead of Figaro) as Jenny’s mother is having words with someone trying to drive their car through the street baracade.  The latter made me think of evenings with the Playstation Singstar game as we tried to ad lib to the words of a favourite song.
Some felt that Elly lacked substance as a character, and that while her close relationship with her brother was a highlight when she was a child, it became a problem in the second half of the book when she was an adult.  I liked the author’s explanation in the youtube video that sometimes such a close relationship in childhood can become unhealthy in adulthood and considering that Ellie was home schooled, her brother at boarding school and closest friend left behind when they moved to the country, I can understand her reticence to forming close relationships in adulthood.  The other characters were generally thought of as quirky, with mention by the book club members of how they warmed to some of the minor characters – particularly Jenny Penny and Elly’s father.
I really enjoyed this book and thought it promoted a lot of good discussion on families and social norms.  You might like to try it with your book club.
Our July book club book is The Help by Kathryn Stockett, and I am looking forward to the discussion of this as it has been a favourite with customers of the store.  Let me know your thoughts if you have read it.

For the Cherub fans out there, Shadow Wave, the 12th book in the series by Robert Muchamore, is now out in paperback ($17.99).  Drop in and get your copy.

Other series for teenagers with new books in store include:

Our trading hours over the Easter will be as follows: